Running Toward Lent: Mercy, Witness, and the Cross 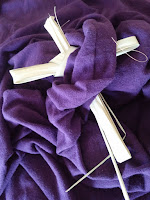 As Lent approaches, our minds turn to images of ashes, thorns, and the Cross. We don't anticipate the Lenten season as we do Easter or Christmas because, let's be honest, self-mortification and deprivation of the essentials (coffee, chocolate, Facebook) is not something we look forward to doing. As Catholics, we love Jesus, and we want to be closer to His Sacred Heart, but as human beings, we hate conversion; it's hard, and we always have to give up something. Converting our hearts to Christ seems like it should be easy because what we give up is sin, which we hate...or think we do. If we're honest, we know that there's that small part of us that doesn't want to give up the sin that comforts us, tells us that people who never gossip are weird or convinces us that we have earned that latest and greatest purchase. Mortal sin, the really obvious stuff, is offensive to our senses; it's the small, petty, "white lie" sort of stuff that actually whispers in our ears, "You can't really help it. It's normal...everyone does it." I don't know about you, but I've had to answer that old question, what would I do if all of my friends jumped off a bridge...so much for choices being justified by "everyone else."

Mercy is the Key

I'm not going to try to convince you that this attachment to sin isn't normal. "Concupiscence," as it's referred to by theology nerds (you can just say "attachment to sin," much easier to pronounce), is the unavoidable result of Original Sin, the condition we inherit from our parents, just as we inherit our human nature. Does this mean that it's impossible to ever stop sinning? Why do we bother trying, if we can never avoid this unfortunate participation in the human condition? One word: Mercy. How fortuitous that our pope has declared a Jubilee Year of Mercy. Good call, Pope Francis. What the Pope realizes is that mercy is the key to a conversion of the heart, a renewed commitment to witness to the power of the Gospel, and ultimately, the transformative power of sacrificial love.

Before we continue, it's important to get our terms straight, so that we're all using the same language. Mercy can be understood in many ways, so if we think we're saying the same thing, but our definitions are actually different, we are guaranteed that the dialogue will go nowhere. As a first premise, I am going to define "mercy," not as the elimination of suffering, but God's willing act of bringing good out of any situation, the proverbial "writing straight with crooked lines." This is the only explanation for the Cross. The Father didn't compel the people to condemn Jesus, or force Pilate to weakly allow it to happen. Why? Because He is a respecter of the free will He created, and yet, in their own sin, the people crucified the Son of God, and as St. Paul tells us in Romans 5, "...where sin increased, grace abounded all the more" (Rom 5:20). The result? We are now free of the covenantal death that follows from sin (these are the "wages" that Paul mentioned in Rom 6:23), allowing us to enter into a new covenant, greater than the previous one, wherein we receive access to the Father...and the "household of God" (Eph 2:18-19). There are plenty more vocab words in there that we could define, but let's confine ourselves to the idea of "mercy" to avoid what, in light of the vastness of Revelation in both Sacred Scripture and Sacred Tradition, would be an endless and still insufficient post.

Seeking Out the Cross 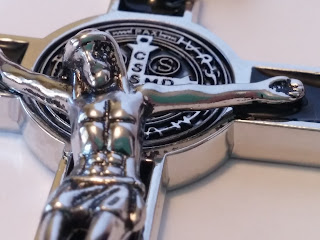 So what do mercy, witness, and conversion have to do with each other? The relationship seems obvious- the Eternal God, in His mercy, came among men to bring about the conversion of the world, and out of our conversion, we are called to witness to the Gospel as we go out and show mercy, right? That is all completely true, but with a very major and unavoidable element missing from our modern language and mentality- the Cross.

When considered against the backdrop of human frailty and fear of suffering, it's no great surprise that we falter in accepting our own crosses. We tend to view our difficulties and sufferings with a hardened heart and defeated spirit, but the issues with which we actually wrestle are not the disappointments and pains, but the way in which we approach them. I say, "approach them" because we are not called by the Gospel to leisurely wait for the Suffering Servant to come to us, so that we may help Him on His way to Calvary. No, we are called by the Gospel to go out and meet Him, help Him carry His Cross, and relieve His pain, and we do this by searching for and doing the good we can draw out of others' sufferings. It is our joy to help lighten His burden because by carrying the Cross and accepting the Passion and Death that followed, He lightened our own burdens, and showed forth the Father's mercy. Here's our call to witness, as an image and result of Christ's own sacrificial love.

This is all lovely in its own right, and those who have experienced suffering for the sake of another have certainly had a taste of Jesus' sacrificial love, but what of those times when we just can't joyfully accept our crosses? Answer: we need a renewed understanding of suffering and sacrifice and a willingness to embrace the opportunities we have to witness the beauty and value of Christ's atonement for our sins. Lent is a perfect opportunity to deepen our understanding of mercy, both in acknowledging our own sinfulness and our need for a Savior, and also in our own willingness to go out and accept sufferings with love to bring God's mercy to others. Here's a little theological math secret (this is important, so pay attention):

Yes, it really is that simple. I did say "simple", not easy. Jesus, who completely emptied Himself of His Divine powers (Phil 2:7), though not His Divine Nature, did not necessarily know everything in the future that would come from His sacrifice on the Cross. That would be outside of human power, and what that tells us, is that He suffered unimaginable horror...likely without knowing if we would even accept salvation. Sure, He must've known that at least some would embrace the Gospel, but He did not die for only those people; He died for each and every person...in time...ever.

The Hebrew word, chesed is most often translated "mercy," but the larger meaning is much deeper because it reflects God's loving faithfulness to His covenant promises in spite of our sinfulness and failures. The faithfulness of God is found in the eternal benefit of the Cross, available for the salvation of all people throughout all time. God is ever-faithful and ever-merciful; we have only to respond by returning to Him through the conversion of our hearts and sharing in the mystery of Christ's suffering, sacrificing our lives for the good of others as a witness to the world of His mercy.

Return to me with all your heart

What we can take from this as we run toward Lent is that, we don't have to shrink from suffering if we can direct it toward our Lord, both as a return to Him, and as a participation in His mercy. We offer that suffering through loving acceptance of our crosses for the sake of another, and ultimately, we do so without needing to know what or if our sacrifice has accomplished. If we have Christ as our perfect model of mercy, we can know that the Father brings mercy about as He wills through our continuous conversion. He may not have known, as He hanged on the Cross, who would choose to follow in His path, but He loved us enough, that He did it anyway.

Posted by SnarkyTheologian at 11:05 AM No comments: