"The blood of the martyrs is the seed of the Church."   -Tertullian 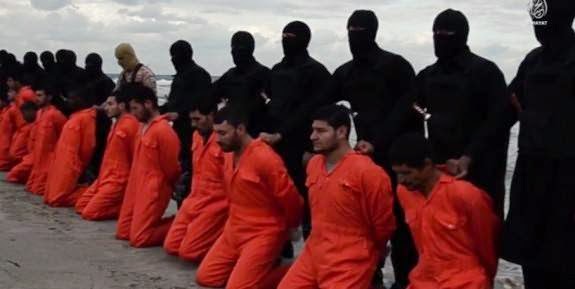 How have I not heard about this, save from the internet? Why? Because the West had decided that Christianity is to be lumped in with those who create terror in the hearts of men to bring about their "conversion." True conversion can only be a matter that takes place in the heart, not by the sword, and because we have been taught and have perpetuated an unfounded garbage history in the Western world out of a hatred for the Catholic Church, ALL Christians are now in the sights of those who would and do make martyrs of us.

To those in the "enlightened" West: if these "crusaders" are killed by reason of the BAD and completely FALSE history you perpetuate, then their blood is on your hands. Go learn the REAL history about the Crusades, the Inquisition, those things which are being used against peaceful Christians (yes, today's Middle Eastern Christians are almost entirely peaceful, only qualified for lack of 100% certainty). We can no longer live by this revisionist history of the Church and the Western world, or we will die by it as well.

The great "crusade" is the unintelligible blathering of self-proclaimed Western "enlightened intellectuals" against the Catholic and larger Christian Church. These are the cause, who have not studied the history of the Church other than their basic college courses or reconstructionist theories, which spout the same disdain against any religion or any authority, but who have the audacity to claim they KNOW that the Church murdered and plundered and tortured, when this was never true. In fact, there is no evidence that Islamic leaders of the time had any hurt feelings...because they were the aggressors, AND THEY WON...and said as much.

Western anti-theists (not to be confused with atheists) had better learn their history and put their faith in something real quick because you can be certain that radical Islamic terrorists will not give a rip about how much you think you know, how many degrees you have, or how much influence you exercise. You, like any of us Christians, are nothing more to them than dogs. I can assure you that the peacefulness of the lives of the "Nation of the Cross" will be redeemed, and more will come to Christ by their witness because "they will know us by our love."

How will your legacy end other than
"This is the way the world ends; not with a bang but a whimper."    -T.S. Eliot

Even as our own brothers and sisters from the same history are slaughtered, our President and the entire West whimpers, wondering how this people could hate us, when we've made every effort to argue that it's Christianity's fault, just to please them. The truth: you've been crusading against yourselves all of this time.
Posted by SnarkyTheologian at 3:35 PM