The Art of Catholic Charity

The Gospel in the Secular Culture
I don’t know anyone who doesn’t like art, and really, what’s not to like? Art, in all of its forms, inspires us and expresses who we are as a society, as a culture. Recently, a priest friend of ours shared some of his artwork with us. They were extraordinarily beautiful depictions of saints who are known for their great love and care for all mankind. In the Vatican II document, Apostolicam Actuositatem, the Council called the laity to be active participants in the modern world, that they would speak the truth of the Gospel in the language of the secular culture. Even now, we are called to be in the world, even as we are not of it for the purpose of transforming it by our love (Jn 14). This should be the goal of Christian art as a cultural phenomenon; it is seen, heard, and experienced, in order that it may be an expression of Christian love that inspires greater love in society.

Typically, culture has been the stabilizing element in each time period throughout history. We tend to think that visual and musical arts are the primary elements of culture, along with literature, invention, and scientific advancement, and that is certainly true. However, culture is more than the art, politics, and even demographics of a particular people or period. It is the larger social and ethical contract by which we choose to live, and its expression is reflected in those daily tangible elements of the overall society. Yet, how many of us have considered that what we do each day is art? More specifically, do we believe that, as Christians, art includes our acts of charity, living lives of hope, and confessing the faith through the frequent and communal celebration of the Sacraments? This is not even a plausible idea in an increasingly secular world, but we are encouraged to move and cooperate within the world to bring the Gospel to the nations, in order that all people would turn from worshipping the creation and rather, give glory to the Creator.

I am reminded of how rarely we see religious art displayed outside of a church anymore. In fact, there are often more examples of an anti-religious and even blatantly immoral nature openly displayed, often with implicit approval of secular authorities and much of society. It was once just as common that the nobility of a time would commission and display beautiful works of artistic grandeur, religious works. In fact, for many centuries, the artistic genius of Western society was influenced, encouraged, and protected by the Church. Many of the greatest pieces of art, Michelangelo’s frescoes in the Sistine Chapel or Luini’s Christ crowned with Thorns, for example, were begun under the patronage of the Church or its members. Many of us grew up believing that, when the Dark Ages descended upon Western Europe, it was due to the Catholic Church destroying any sense of intellectual, scientific, or artistic growth, though the very opposite was true. When the Holy Roman Empire was attacked by neighboring groups, such as the Goths, Saracens, and Magyars, it was the courageous efforts of members of the Church who protected the cultural treasures that remain with us today. At a time when many nations had come to destroy the culture, the Church, typically by the efforts of a number of religious orders, preserved not just works of art, but the larger cultural memory from which our own society is formed.

Art in the Service of God 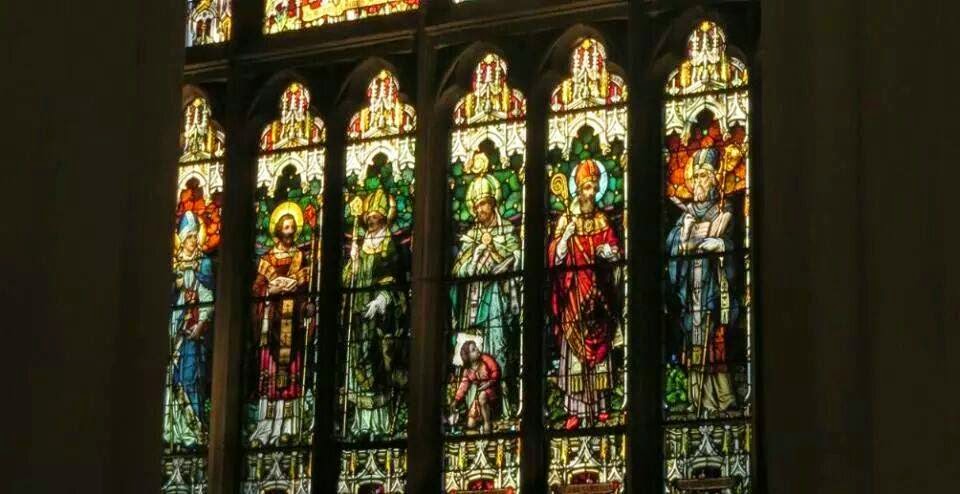 The culture of the modern Church is one that seeks to bring the message of the Gospel to a struggling world. By living the commission of the Gospel to, “Go, therefore, and make disciples of all nations,” we create a culture amenable to a world that longs for an answer to the effects of sin. We draw in those who would not otherwise accept faith as a reasonable premise by the pure beauty and awesome nature of a Christian culture, present in artistic media, stirring literature and theater, and acts of love and charity. All of these, in service of the Lord, are works of art. St. Paul, throughout his First Letter to the Corinthians, speaks of each individual’s contribution to the Body of Christ, encouraging each to use the talents entrusted to them to work in union with others’ talents to animate the Church. This unity is a visible sign of the many gifts and grace which draw the nations to seek the source of beauty, rather than being satisfied only by what is found to be beautiful, for as we know from Isaiah 40:8, “The grass withers, the flower fades; but the Word of our God will stand forever.” Art in the service of God is inherently apostolic because it proclaims the truth to all nations to bring them into a loving relationship with the only and eternal God.

Back to that friend of mine, it is worth noting that, in addition to his drawing, he is also a talented man of theater and is also fortunate enough to also have a wonderful singing voice. Truly, it can be said that he has an artistic gift. There is, however, a common misunderstanding that gifts expressed in Christian art must take certain forms, but the reality is, not everything must be Handel’s Messiah or Michelangelo’s David. In fact, these are works that speak to the world years after their time, due in part to their inspiring workmanship and lasting beauty, but also due to their place as icons that speak to the culture throughout the ages. There is just as much potential for a modern song or painting to raise the eyes of the soul, whether it be a song like Lord, Raise Me Upby Jewish reggae rapper, Matisyahu, which calls on the Psalms in a unique way, or Catholic author, Piers Paul Read, who has written many books, both fiction and non-fiction, drawing upon many religious themes. While not considered traditionally classic works, these are religious and artistic works that are not set apart from culture, but rather, are quite approachable and immersed within it.
The art of charity is also still alive in the modern world, even as it was in centuries past. It is not necessary for one to be an ascetic like St. Anthony, or to receive visions like St. Juan Diego to be an artistic lover of God’s people. There are a number of modern figures who have also had a great impact on the modern world, for example, Blessed Teresa of Calcutta or even Pope St. John Paul II. Both figures showed a great love for the least of God’s people, and in the case of John Paul II, the architect of the New Evangelization, his remarkable forgiveness of the man who attempted to assassinate him showed the power of Christian love, causing the man to be converted by the pope’s witness to the truth of the Gospel. These simple acts of love, inspired by the love of Christ, inspire many to seek God to understand what can cause people to live such holy lives. Once again, great acts of martyrdom aren’t necessary to convert hearts, but rather, as Blessed Mother Teresa said, “Not all of us can do great things. But we can do small things with great love.” Charity is not just one of a number of art forms. It could be said, rather, that charity is the greatest and most authentic form of performance art.

More than an Option—a Necessity
Christian artistic expression is not simply an option, but rather a necessity if we are to speak to the surrounding culture, which frequently encourages competing ideas of what truly are love, beauty, and justice. Today’s secular art is in need of a dramatic infusion of Christian ideals, but the greater culture is in even greater need of a renewed witness of authentic love. In its ability to speak the language of all mankind, neither judging, nor proselytizing, artistic expression has the power to convert hearts by its beauty. Thus, the understanding of what constitutes Christian art can no longer be limited to physical and musical expressions, but must be expanded to include whatever receives its inspiration from the truth of the Gospel and inspires a desire for Christ and His Church. Every small act of love is moving and beautiful, and each can be our own contribution to the art of Christian charity, the voice of Christ in the modern world.

Posted by SnarkyTheologian at 1:16 PM